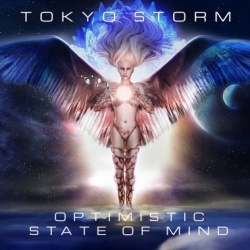 Birmingham born Tommy Strix has forged a reputation on the West Midlands music circuit of possessing a large vocal range and versatile voice. He takes his vocal influences from the likes of Tony Martin (Black Sabbath), Geoff Tate (Queensrÿche), David Coverdale (Whitesnake) and many others. His passion for music started at a young age after being captivated by the sounds he heard from his dad's Queen Live Magic cassette. A keen lyricist, Tommy has fronted originals bands aswell as covers bands in the West Midlands over the years and has performed in Camden in London, and at local major venues such as The Robin 2 and the Slade Rooms. After going through various projects over the years he feels he has finally found his home in Tokyo Storm.

Joe, a Birmingham native, had an interest in music when he was six years old, learning to play the piano (self-taught) before discovering the guitar at the age of fourteen. Joe founded his first band at the age of 15 and quickly discovered a passion for writing his own songs. He has since performed, written, and organised music for a variety of bands. Joe has finally completed the circle by reuniting with Bob Peach, with whom he initially cooperated when he was 17 years old. Joe's creative, writing, and production abilities are on display in Optimistic State of Mind, a testament to his musical journey.

Coming from a musical family, Jason was born and raised in Solihull. He first picked up an acoustic guitar aged 8 but unfortunately couldn't get his small hands around the neck. It wasn't until his early teens after purchasing a second-hand electric guitar that he spent many hours behind closed doors learning to play. Jason has been in various rock bands over the years either as Guitarist, Vocalist or Bassist but has always liked to produce and perform original material with varied influences such as Duran Duran, U2, Toto and Great White. Bass guitar became his first choice of instrument a few years ago. Very much like a 6 string, but only 4 strings and much cooler! He joined Tokyo Storm in late 2017 having developed an optimistic state of mind while listening to the bands fresh material.

Bob has worked, toured and produced bands for many years. The role models who inspired and shaped Bob in his early years were John Bonham (Led Zeppelin) and Simon Phillips (Toto). Bob has also acquired the knowledge and skills as a producer and has over the years landed him publishing deals in the USA and Canada. Having previously played on two albums, Bob has now turned his skills to writing and recording in his own studio and in the last couple of years has teamed back up with Joe Bartnicki to write and record Optimistic State Of Mind.

Our Partners In Crime

Radio Stations That have featured our music